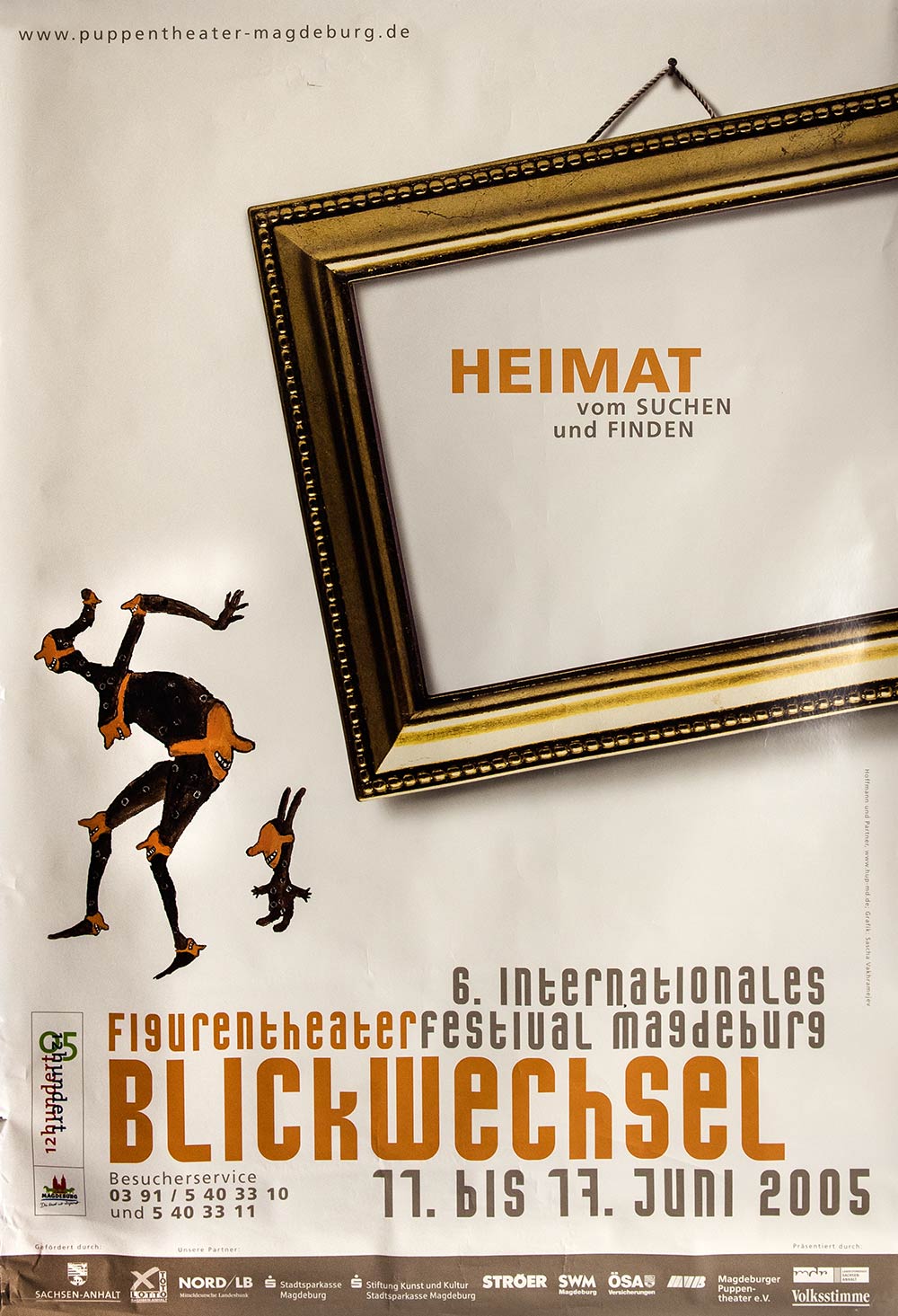 About looking and finding home

For one week, Magdeburg will be home to artists from all over the world who will present unique and surprisingly diverse Performance Arts as well as express commitment to providing contents. Why not enter into dialogue with the world of puppetry where you will be swept away by the vibrancy and uniqueness of this form of theatre. Why not enjoy tales and stories which touch your souls, provoke your emotions and make you roar with laughter. Everyday heroes and the fortunes of bygone centuries take centre stage and will consequently be rescued from a gradual descent into oblivion.

Home – all of a sudden the notion of home enjoys something of a renaissance. No longer is home thought as a synonym of the blood and soil propaganda launched by the Nazi regime. Home has changed from being a negative buzzword of the 80s, a concept behind the German “Heimatfilm” genre and sentimental expression of folkloristic movements, to becoming an acceptable notion. Home has survived despite the use of home as metaphor for a socio-political concept that was once called GDR. Home – no more rules of stereotyped thinking apply to home; rather we crave it an continue to nourish and re-experience our individual craving. For some, home is a matter of place. For others, it is akin to the smell or taste of something, or to people.

In a time where identities dissolve, people are filled with a deeper longing of safety, comfort and home. This leads to a critical approach to the past as well as knowledge of it. “We must never forget that without a compass, without remaining faithful to the lessons of history, there can be no future”, is what Jacques Chirac said during the ceremony marking of the 60th anniversary of the Allied Forces’ landing on the beaches of Normandy. The context leads to an understanding of a somewhat direct link to the performances which have been chosen for this year’s festival. To emotionally experience the presence, we must first explore our roots. There is a popular Mongolian proverb where a frog in a well says, “The sky is no bigger than the mouth of the well”, and which protests again any attempt to restrict mental freedom. As long as we have hopes, wishes and desires which we let rouse our curiosity, we will find all the potential we need to move forward.

The same applies to how we experience the art of puppet theatre which increasingly sees itself as home to other similar arts and therefore has a large impact on vitality, renewal and critical discussion. On this note, we are more than happy to provide you with astonishing insights during the festival.

This year, particular FOCUS has been placed on The Netherlands. We have come up with excellent productions which are not only inspired by the quest for a unique artistic approach, but also reflect the artists’ political responsibility with regard to today’s world. The kind support of the “Fonds voor de Amateur- und Podiumskunsten” and the Royal Netherlands Embassy enables us to stage six performances during the festival featuring. among there, the group Meneer Winterberg and Warner & Consorten in the festival performance “Elbe Theater”.

The 6th International Puppetry Festival “CHANGE OF VIEW” is a major attraction during the celebrations of the 1200 year anniversary of Magdeburg and it demonstrates commitment to our city since the puppet theatre is inseparably connected to Magdeburg. Productions will be mounted at locations meant to be stimulated and re-discovered by artistic performances during the festival. The focus will sharpen on what we are accustomed to and it will support the idea of Magdeburg being a place of home. If we remain sensitive and alert, open our hearts and minds to the minor and major changes of the world, we will hold on to optimism and hope which can also be inspired by theatre culture.